You are here: Home / Trophy Tour 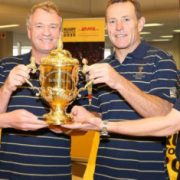 DHL, the world’s leading express and logistics provider, and the International Rugby Board (IRB) announced that DHL will be Official Logistics Partner of Rugby World Cup 2015. The partnership will see DHL assume responsibility for the logistics of one of the biggest international sporting events, which will take place in host country England over six weeks in September and October 2015.

As Official Logistics Partner, DHL will be responsible for the transportation of Tournament and team equipment from around the world to the 13 match venues in England. The equipment to be transported will include, for example, an estimated 1,400 rugby balls, 200 kicking tees and 200 tackle bags. From October 26 to October 30, 2013, DHL carried the 4.5kg Webb Ellis Cup on its global network between the four former holders of the Trophy: New Zealand (the current holder), Australia, South Africa and England. The journey will see the Trophy handed over by DHL and Cup Chaperone – legendary former New Zealand player Grant Fox – to former Rugby World Cup winning players from each country for a brief local celebration with fans, before it is then delivered to Dublin, Ireland for the inaugural IRB World Rugby Conference.

DHL and Treble Group activated the Rugby World Cup Trophy tour to Johannesburg and Cape Town as well as the following activations;