You are here: Home / siya kolisi 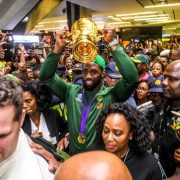 Humbled and over-awed was the reaction of Springbok captain Siya Kolisi when he walked out of customs to a united South Africa, where thousands of Springbok supporters were there to welcome their heroes at OR Tambo International Airport in Johannesburg on Tuesday evening.

Kolisi and South Africa’s Director of Rugby, Rassie Erasmus, whose flight via Sydney was delayed by a few hours, walked through the main arrivals hall, which erupted with thunderous cheers when the Bok captain walked through the doors carrying the Webb Ellis Cup.

This is only the beginning of what will be reminiscent of scenes in 1995 and 2007. Treble worked closely together with SA Rugby to successfully organise the Trophy Tour after Jake White and John Smit brought the Webb Ellis Cup following the Boks’ 15-6 win over England in Paris.

It’s our time again, and once again Treble has been tasked with ensuring that millions of South Africans get to see their heroes parade world rugby’s greatest prize. The planning of this project is mammoth and there is very little time to waste. But Treble’s experienced team will strive to ensure that South Africa shares this special moment with their heroes

No rugby team on the planet can eclipse the unification and nation-building that this little golden cup brings to South Africa. Treble has had first-hand experience of this for the entire duration of the tournament.

Springbok Supporters’ Club account manager, Carmen Taylor, has been overawed by the power of rugby to unite all South Africans. “The Springboks have raised the hopes of a nation and united South Africans globally. We stand proudly behind the Boks and throughout the Rugby World Cup the Springbok Supporters Club has been in the front row rallying the support of the fans.

“With eleven official Boktown venues, Treble has seen thousands of Springbok fans gather to watch the games on the big screens. The atmosphere at Boktowns has been electrifying and we continue to drive the passion of the fans as we celebrate with the Boks on their victory parade.

The trophy tour kicks off in Gauteng on Thursday, 7 November, with the Bok bus travelling through parts of Pretoria, Johannesburg and Soweto.

On Friday (8 November) the Boks will be in Durban, followed by stops in East London (Saturday 9 November), Port Elizabeth (Sunday 10 November) and Cape Town (Monday 11 November).