You are here: Home / Richard Kohler 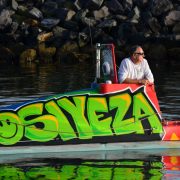 Richard Kohler’s two years of planning for his incredible Ocean X adventure has now come to fruition as he embarks on his journey this Friday.

Ocean X has always been Richard’s dream. No one has ever attempted to kayak across the Southern Atlantic Ocean and the 52-year-old is on track to make history when he departs from Granger Bay in a North Westerly direction to Salvador in Brazil

The journey will take between 60 and 80 days to complete with Richard paddling on an 8m-long kayak constructed out of carbon fibre, making it lighter and easier to use. He will use a custom-made pebble and CS1 blade which is about 260-270 cm long.

Richard aims to raise R100 000 for Operation Smile, which will bring many a smile for Christmas. He has named his kayak Osiyeza, inspired by Johnny Clegg’s 1993 hit, The Crossing. Osiyeza means “We are coming” in isiZulu.

He will consume around six litres of water and eat mostly freeze-dried foods with minimal carbohydrates. In terms of communication, Kohler will have a Thales Vessellink that is used to provide global satellite coverage for maritime communications. Through this, he will be able to send photos, videos and emails.

Richard will also have an Iridium Handheld Satellite phone for voice calls and texting in case of emergencies. SMD in partnership with the AST Group have sponsored the equipment and airtime for both units, bringing Richard’s adventure to life for his Ocean X supporters who can follow his progress on social media.

Operation Smile
Operation Smile is a global surgical non-profit that improves the health and dignity of patients living with cleft lip and cleft palate in low- and middle-income countries. Since 1982, Operation Smile has been committed to providing patients with health that lasts through life-saving cleft surgeries and comprehensive care, helping them to better breathe, eat, speak and live lives of greater quality and confidence. Its training and education programs elevate safe surgical standards and strengthen a global network to reach more people earlier in their lives. Learn more at southafrica.operationsmile.org or by following @opsmilesa on social media.

For every R6,000 raised another child can receive a life-changing operation. Richard aims to raise over R100k for Operation Smile.

Ronel Visagie, Operation Smile’s Marketing Coordinator, said, “It is an honour to have someone like Richard Kohler choose Operation Smile as his beneficiary and take up such an enormous challenge, to help raise funds for kids and adults born with a cleft lip and palate – to help change lives; one smile at a time.’

The Treble team wish Richard all the very best on his incredible journey and we are behind him all the way to Brazil. 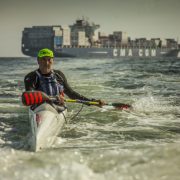 This passionate South African is at it again! After becoming the first person to paddle the entire circumference of South Africa, Ocean X is Richard Kohler’s odyssey to paddle unsupported from Cape Town in an eight-metre paddling torpedo across the Southern Atlantic Ocean to Salvador in Brazil.  Later this year Richard will embark on an unsupported paddle in aid of raising funds for his charity of choice, Operation Smile. The Treble team has been hard at work behind the scenes supporting Richard as the countdown begins in earnest.

Sailing has always been in Richard’s blood. He began that journey at the age of six, and has sailed at international level, including the 2007 Americas Cup for South Africa aboard the Shosholoza. Kohler has also taken part in numerous competitive paddling events, achieving his provincial colours twice, until a back injury forced him to paddle less competitively.

Kohler is certainly no stranger to the ocean, which is why Ocean X is a story about endurance, courage against the odds, and the indomitably of the human spirit. As the world shrinks and the opportunities for adventure diminish, it takes a man of unique vision to be the first person to paddle a kayak solo and unsupported, across the Southern Atlantic Ocean.

Treble is excited and privileged to have secured the premium publishing house, Highbury Media, as Ocean X’s official media partner. Highbury will assist with the content generation and PR strategy leveraging their extensive digital and print magazine portfolio.

Preparations are underway to secure everything Richard Kohler’s needs for this tough and uncompromising expedition. Treble is very aware of the current challenging economic environment, but has taken up the challenge to assist Richard to raise the funds to make this odyssey every success both for Richard personally and for Operation Smile.

Treble looks forward to Richard successfully completing the experience, with some local corporate partners in the team and first hand being able to witness the real effect of their efforts to raise awareness and funding for this great initiative. If you would like to get involved please contact Treble, as we would appreciate the opportunity to discuss with you to come onboard and assist. For more details please contact [email protected] or [email protected]

The remarkable aspect of this journey into the unknown is the vessel that will carry Kohler along the way in achieving his ultimate goal of paddling from South Africa to Brazil. An 8m paddling torpedo allows very little leeway to move around after 15 hours and 100km of paddling every day, and every single inch of space needs to be utilised for optimal performance and comfort.

Seaport Supply, Cape Town’s largest boating retailer are supporting Richard with the equipment for the boat build, safety equipment and supplies for his craft. “The design brief was to keep it as close to a traditional kayak but that it should include a sleeping area that can protect me from the uncompromising elements typical of being out at sea,” says Kohler.

“The kayak is 8.5m long and 90cm at its maximum width. Considering an average shoulder width is around 50cm, it does not leave much room on the inside for me and my gear.” The cramped conditions are one of Richard’s biggest challenges. Avoiding leg cramp and debilitating salt sores are daily requirements to ensure he remains at optimal levels to complete his heady task.

From the outside there is a large array of solar panels with the two forward side panels that can lift upwards to present better solar absorption of the sun for drinking water. Research indicates that having enough electrical power to make water is one of the highest priorities. In Kohler’s survival of this mammoth task that awaits him; water equals life.

It remains a stiff challenge nonetheless, but Richard Kohler certainly has the drive and determination to succeed in his endeavours. Having been attacked by a shark during his trip along the entire coastline of South Africa, nothing will stop this brave man from dipping his toes into the cold Atlantic Ocean yet again and raising money for Operation Smile.