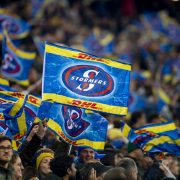 It’s great to see the fans are back. Sports events have returned to normal and we have some exciting opportunities! 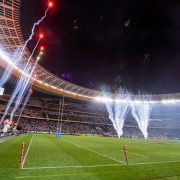 More tickets to the Springboks’ six home Tests – starting with the Castle Lager Incoming Series against Wales next month – will be released following the news that more COVID restrictions have been lifted in South Africa.

South Africans welcomed the good news that the Government had gazetted new regulations that included the dropping of limits on both indoor and outdoor gatherings, which means rugby stadiums can now sell all available tickets instead of the only 50% capacity that had been permitted.

The response from fans was instant, with the first match expected to feature a full stadium in more than two years set to be Saturday’s Carling Currie Cup final in Kimberley, where Windhoek Draught Griquas host the Airlink Pumas from 15h00.

“It feels like we’ve been set free,” said Jurie Roux, CEO of SA Rugby. “Certainly an additional 80 000-plus tickets for major rugby events have gone into the market today.

“The news comes just in time for the Carling Currie Cup final and the three Springbok Tests against Wales next month.

“We saw the massive appetite for returning to live sporting events with the playoffs in the Vodacom United Rugby Championship in Cape Town and Pretoria in the last few weeks and, as a sport, we are delighted with the news that we are moving back to normal.

“Our loyal fans have not been able to see the Springboks play in South Africa for almost three years, and we are expecting them to arrive in droves for the Tests against Wales in Pretoria, Bloemfontein and Cape Town next month.”

As part of the lifting of the regulations, South Africans are also no longer expected to wear masks indoors, while mask wearing and presentation of vaccine certificates or negative COVID tests are no longer mandatory to enter any venues.

“Even though the restrictions have been lifted, we would still like to urge everyone who attend matches and events to keep their own personal safety, and those around them, in mind when entering venues and take the necessary precautionary steps, and we would also like to strongly encourage vulnerable people and those with underlying medical conditions to take appropriate health precautions,” added Roux.

Information on tickets to the Springboks’ home Tests can be found here, while tickets to the Rugby World Cup Sevens in Cape Town in September are available here.