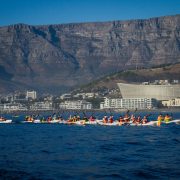 On Freedom Day, 27 April, the cream of SA’s ocean paddlers will once again converge in Cape Town for the 2022 edition of the annual Prescient Freedom Paddle – a 27km race around the iconic Robben Island and Africa’s biggest ocean paddling event.

Since its inception in 2018, the circumnavigation of the island, which housed former President Nelson Mandela and many other political prisoners, has become an event in celebration of our nations’ freedom.

Always seeking to raise the bar with every passing year, the Treble Group, along with the organisers and sponsors, have boldly moved to make the event accessible to a wide variety of ocean paddle crafts, while promoting shorter alternatives for the less skilled and fit paddlers.

This iconic event provides a platform for people from all walks of life to engage with Nelson Mandela’s legacy, backed by the race’s loyal title sponsors, Prescient – a leading financial management & investment company based in Cape Town.

“As proud sponsor of the Prescient Freedom Paddle, we appreciate that paddlers are fastidious about details, from training to preparation and execution. Similarly, we at Prescient are meticulous in our methods, determined in our approach and steadfast in our commitment to growing and protecting our clients’ assets,”  says Willie Venter, Chief Executive Officer at Prescient. “Certainty comes from consistency, a trait we share with paddlers”.

The main event has been dominated by Hank McGregor, the 11-times world marathon champion, who has won the title three times in succession, and always against a field loaded with some of the world’s best exponents of surfski racing.

The same is true of the women’s division, and with South Africa currently boasting the surfski world champions in the senior, U23 and junior ranks, the racing for the women’s laurel’s will once again be a standout feature of the event.

To make the event as inclusive and accessible as possible, the organisers have retained the two shorter course distances and opened the event to a wide variety of different ocean paddle-powered craft for the 2022 edition. The traditional surfskis will be joined by stand-up paddle boarders, prone paddlers, ocean sculls and ocean kayaks.

“Any paddle powered craft that is seaworthy enough to complete the racecourse in a reasonable amount of time is eligible,” said event organisers Robin Tindall.

To get more paddlers involved in the milestone day, the event will once again offer a 15km and a novice-friendly 8km option to the day’s event programme.

“The response has been exciting,” said Tindall. “There has been great interest from younger paddlers who have come through surf lifesaving ranks, who aren’t up to the demands of the 27km race, but desperately want to be involved in this significant day.

While Prescient enters its third year in succession as the race’s title sponsor, its matched by a three-year commitment from the City of Cape Town to back the landmark event on Freedom Day.

“The City of Cape Town is proud to commemorate Freedom Day by hosting the annual Prescient Freedom Paddle,” said the City’s Mayoral Committee Member for Safety and Security JP Smith.

“This is a special day for many people in the country and as the City we are honoured to be associated with Prescient Freedom Paddle, which pays homage to the legacy of the heroes who made it possible for South Africans to have this democracy.

“It is also pleasing for us to welcome athletes and their families to the Mother City, and we hope they will use this opportunity enjoy the many attractions of Cape Town has on offer.”

Prominent steel and aluminium supplier Euro Steel has been part of the event since its inception, adding another key consistent support foundation to the event.

“It is significant that we have a legacy of loyal support from a number of well-known brands and businesses, helping us through the tough times of the past few years with loyalty and consistency,” said race director Robin Tindall. “The event would not be what it is today without the buy-in of Dunlop, Peninsula Beverages, Carbonology, Brian’s Kayaks, Mocke Paddling and Devils Peak,” he added.

WATCH: Robin Tindall and Richard Kohler run through all the details you need to know if you are competing in the 2022 edition of the Prescient Freedom Paddle.