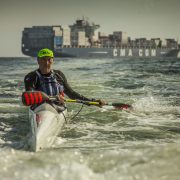 This is a story about endurance, courage against the odds, and the indomitability of the human spirit. As the world shrinks and the opportunities for adventure diminish, it takes a man of unique vision to be the first person to paddle a kayak solo and unsupported, across the Southern Atlantic Ocean.

After becoming the first and only person to paddle solo the entire circumference of the South African coastline in 2012, Richard Kohler has been training for his next odyssey at a time when self-isolation is the norm. Ocean X is the ultimate solo mission, and after Covid delayed his departure in December 2020, the 52-year-old Capetonian is currently making final preparations and counting down the days to his departure from Cape Town to Salvador in Brazil, solo on a kayak.

“Osiyeza” will be Kohler’s home for the 60 to 80-day paddle, the name deriving from SA music legend, Johnny Clegg’s 1993 song “The Crossing,” the literal meaning “we are coming.” The song is about a dream that is within reach, the possibility to cross from darkness and suffering to prosperity and is a reminder to Richard that his dream is within his reach.

Kohler will be leaving from Granger Bay in Cape Town and will be looking for the weather window between 1 – 10 December for his departure. He will be the first person to attempt to paddle a custom kayak across the Southern Atlantic, 7000 km unsupported and alone.

Richard intends surviving his “Crossing” and not just to acquire bragging rights for the latest outlandish watersports adventure. He is motivated by raising funds for charity, Operation Smile, and partly to slake the kayaker’s innate lust to paddle across anything larger than a glass of water.

Background
Sailing has always been in Kohler’s blood, beginning his journey at the age of six to later sailing at international level, including sailing in the 2007 Americas Cup campaign for South Africa aboard the Shosholoza. Sailing the equivalent of three times around the globe as a professional yachtsman, in 2012 Kohler became the first person to solo kayak around the entire South African coastline. Having been attacked by a shark during his last mission, having his kayak broken in half and all his equipment stolen, Richard has learnt the art of never giving up and nothing will stop this brave man from dipping his toes into the cold Atlantic Ocean yet again.

The Kayak
The remarkable aspect of this journey into the unknown is the vessel that will carry Kohler all the way to Brazil. An 8m paddling torpedo allows little leeway to move around after 15 hours and 100km of paddling every day, and every single inch of space needs to be utilised for optimal performance and comfort.

“The design brief was to keep it as close to a traditional Surfski but that it should include a sleeping area that can protect me from the uncompromising elements typical of being out at sea,” says Kohler.

The craft is constructed out of carbon fibre making it light and easier to manoeuvre. Kohler will also use a custom-made paddle which has a longer shaft and CS1 blade which is 260-270cm long to compensate for the width of the kayak.

“The kayak is 8m long and less than 1 meter at its maximum width. Considering an average shoulder width is around 50cm, it does not leave much room on the inside for me and my gear.” The cramped conditions are one of Kohler’s biggest challenges. Avoiding leg cramp and debilitating salt sores are daily requirements to ensure he remains at optimal levels to complete his task.

Power Up
From the outside there is a large array of solar panels with the two forward side panels to present better solar absorption of the sun for drinking water. Research indicates that having enough electrical power to make water is one of the highest priorities. In Kohler’s survival of this mammoth task that awaits him; water equals life.

Nutrition and Hydration
Kohler will need to stay hydrated and will consume at least 6 litres of water a day. He will consume mainly freeze-dried food with minimal carbohydrates. As a fat adapted athlete, he will get all his energy from healthy fats like Olive oil, nut butter and raw nuts and keeping his body in a state of Ketosis (fat burning).

Kohler will have no supporting safety boat and is expected to paddle an average of 15 hours per day. He will have to schedule time to eat, drink and rest to ensure his body receives enough nutrition and rest to recover from the physical exertion.

Route
Kohler will depart Cape Town and head in a North Westerly direction, benefiting from the prevailing South Easterly wind off the Cape coast. He will then head in a Westerly direction once he is in line with Walvis Bay in Namibia. The wind will be behind him as he crosses the Atlantic and heads North of Rio to Salvador where he will complete his journey.

Richard’s Surfski will have the Thales Vessel LINK satellite communications device using the Iridium Certus network of satellites which can send and receive data. This will mean Richard will be able to send images, short videos, check the weather forecasts and emails daily.

Richard will also have an Iridium Handheld Satellite phone for voice calls and text in case of emergencies. SMD in partnership with the AST Group have sponsored the equipment and airtime for both units, bringing Richard’s adventure to life for supporters who can follow his progress on social media.

Sponsors
Gerhard Moolman, CEO of ALTSA, and close friend of Richards is no stranger to the demands of the open ocean and is excited to sponsor Richard’s mammoth expedition. “ALTSA will cross oceans for their customers,” says Moolman, who holds the Guinness World Record for the longest distance on a Surfski. Almost 20 years ago, Moolman paddled 6,152km from Hout Bay in South Africa to Lamu in Kenya.

“From one adventurer to another I could identify with Richard’s dream, and we are proud to be a presenting partner and help in any way to support Richard’s dream,” he added.

Operation Smile
Operation Smile is a global surgical non-profit that improves the health and dignity of patients living with cleft lip and cleft palate in low- and middle-income countries. Since 1982, Operation Smile has been committed to providing patients with health that lasts through life-saving cleft surgeries and comprehensive care, helping them to better breathe, eat, speak and live lives of greater quality and confidence. Its training and education programs elevate safe surgical standards and strengthen a global network to reach more people earlier in their lives. Learn more at southafrica.operationsmile.org or by following @opsmilesa on social media.

For every R6,000 raised another child can receive a life-changing operation. Richard aims to raise over R100k for Operation Smile.

Ronel Visagie, Operation Smile’s Marketing Coordinator, said, “It is an honour to have someone like Richard Kohler choose Operation Smile as his beneficiary and take up such an enormous challenge, to help raise funds for kids and adults born with a cleft lip and palate – to help change lives; one smile at a time.’

Entering a sports sponsorship is only the beginning to a multi-faceted and complex initiative. Brand exposure on its own won’t suffice, which means you must explore every avenue possible to amplify the sponsorship to its fullest: This is what’s called Sports Sponsorship Activation, writes Kelvin Adams.

Think of the analogy of a remote-controlled car. Without batteries, it’s no use to anyone. It’s an object that stands still. The batteries are what give that agency life, traction, and movement to be able to connect with your target audience in an effective way that will be remembered – especially in a positive and healthy environment like sport.

You may have signed a big team sponsorship or bought the exclusive rights to a major sport event, yet if you do not communicate your message correctly and bring that brand to life, it won’t get the exposure and recognition it duly deserves.

Social media has exploded and it’s a saturated marketplace with groups, pages, and private accounts flooding news feeds. You cannot only expect to be noticed in the maze of information that is social media. That’s why it’s important to energise your sponsorship through other channels of communication.

Sports Sponsorship Activations include all the means one can use to maximize the exposure of the sponsorship programme, which includes promotions, event activities, hospitalities, special events, licensing, PR activities in mass print and digital media and clever usage of social media marketing techniques. All of them can be clearly used both for B2C and B2B channels.

What are the key aspects when it comes to sports sponsorship activation?

Identify and define your primary objectives. It must be clear from the outset – whether it’s direct sales, more clicks and brand awareness. This is critical before you activate any campaign in whatever capacity it might be.

Once that has been established, a high-level detailed and effective plan will ensure your sponsorship gets the maximum impact in terms of marketing and commercial objectives.

To avoid any unfortunate outcomes or infringement of other rights holders, make sure all rights and permissions from the party you’re investing are in correctly place and legally aboard before embarking on a campaign or promotional activities.

Once you’ve answered these and several other questions, it’s important to consider how many platforms and tools you can use to boost your sports sponsorship campaign, and how each of them might play an important role in the whole activation process. This is why it’s always advisable to speak to the experts.

If you want to talk more about Sports Sponsorship Activation, the Treble Team can assist your needs. With over 21 years of industry knowledge, together with key relationships with stakeholders and influencers within the sporting environment, we can shape, tackle, and strike a world-class commercial offering specific to your needs, with a team that will ensure your brand is brought alive.