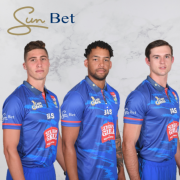 Treble are proud to announce that SunBet, the online betting arm of Sun International, will be joining the Cape Cobras family as an Associate Sponsor of one of South African cricket’s most well known franchises.

SunBet, which offers a secure online platform through which bettors can bet on the outcome of games, will sponsor the Six Gun Grill Cobras until April 2023.

In return, SunBet will have certain rights including kit branding, advertising, social media mentions and can use its association with the Western Cape-based franchise to boost its market presence.

The deal, which was brokered by Treble, sees the SunBet being aligned with one of the most successful franchise cricket teams in South African cricket, having produced a number of leading Proteas stars since the inception of the franchise system.

With the current group of young stars making their mark on the game, the Six Gun Grill Cape Cobras are moving into an exciting era. The team represents the Western Province, Boland, and South Western Districts areas in South African domestic cricket.

The team’s home venues are Six Gun Grill Newlands Cricket Ground in Cape Town, one of the most iconic cricket venues in the world, Eurolux Boland Park in Paarl, and the Recreation Ground in Oudtshoorn.

Cape Cobras Chief Executive Officer, Albertus Kennedy, said: “We thank SunBet for showing their support to the Cobras during these tough economic times and just like their brand is synonymous with entertainment, the Cobras brand of cricket is one which always strives to entertain crowds around the country, so it’s a perfect fit on and off the field.”

Brand and Sponsorship Manager David Brooke: “We welcome SunBet to the Cobras family and know that they are going to bring something exciting to the brand.”

SunBet General Manager, Nitesh Matai, added that SunBet was proud to welcome the Cobras to its family. “We are pleased to be associated with this franchise which is one of the strongest sports brands in the country. Now fans can enjoy watching the game on TV as well as betting on their favourite team on our secure platform. We are excited about working with the team as they enter a new professional era in South African cricket.”

Western Cape Cricket Chairman Angelo Carolissen concluded that “this sponsorship is a huge boost to the management and their squad as we begin our Momentum One Day Cup campaign, we wish them the best of luck for the tournament.”