Keane recently represented in South Africa’s U17 squad in Lesotho, where he showcased his incredible flair and hard work. Keane was named after the Red Devils legend by his father, Mario, who is a passionate Man United supporter, to say the least. Since then, Keane has exhibited great passion for the sport and is intent on becoming a professional footballer.

In honour of Keane’s international achievement, Fortune paid a visit to Hellenic Football Club to present him with a congratulatory pair of Adidas soccer boots. Fortune made a highlight of yesterday evening’s training session by delivering a series of motivational talks.

“Quinton was a very promising youngster at 14 and was taken aside by Colin Gie, ex Hellenic player and coach, and ex FC Fortune club owner,” said Mark Byrne, Chairman of Hellenic Football Club.

“Quinton worked his proverbial socks off every day and was a very focused youngster who knew what he wanted and was prepared to sacrifice the normal teenage things to spend as much time as he could on improving his soccer. He spoke to all our players and challenged them to do exactly the same.”

Hellenic FC, based in Milnerton, Cape Town, is in the business of nurturing young kids and turning upcoming talent into professional football players. Led by Hellenic stalwart Mark Byrne, the Club focuses on grounding their players, from U11 to U18, in a solid education and places a non-negotiable focus on the boys applying themselves in their studies and life skills.

“Hellenic has a unique programme that places focus on the boys’ roots,” said Kyle Nel, Managing Director of Treble Group. “It’s a clear sign of what the Club nurtures and what they can turn out that they have attracted Quinton’s attention.”

Treble was delighted to catch-up with Fortune, sharing memories of when our current CEO, Selwyn Lewis, was chairman of FC Fortune. We are grateful to Quinton for his gesture to the boys at Hellenic FC and look forward to seeing more international talent coming out of the Club. 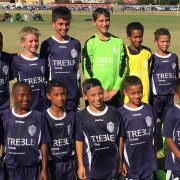